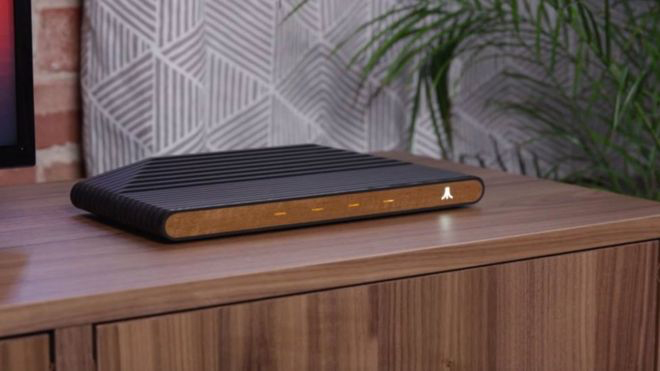 It’s the latest attempt to cash in on gamers’ nostalgia – a throwback console that promises “100+” classic games built in, with new online play.

Pre-orders for the Atari VCS went into overdrive on Wednesday, with a campaign on crowdfunding site Indiegogo raising more than $2m (£1.5m).

That’s well in excess of the $100,000 the company was aiming for, and a remarkable endorsement of the long-lasting appeal of the Atari brand.

Now all the company has to do is deliver on its promises. That may not be straightforward, as attempts to build retro game consoles have had mixed results.

On the one hand, you have Nintendo. Once it launched its classic SNES, it took just over three months to shift more than four million units (two of which went to a mother I met a few days before Christmas in a store near where I live in Oakland. She hugged the attendant when he came back with extra stock, repeating “thank you, thank you” over and over.)

Indiegogo has threatened to use third-party debt collectors to recoup backers’ money if the product isn’t released by the end of this month. The company behind the project Retro Computers Ltd, has blamed hardware issues and a legal dispute for the repeated delays.

The Atari VCS is a more ambitious effort, promising not only retro gaming but new titles and other entertainment features. According to a promotional video, the console will also offer a voice assistant.

But its primary selling point will be the chance to play some of the games that paved the way to the multi-billion dollar games industry we know today.

“Despite the stereotype, gamers aren’t all kids playing Fortnite instead of doing their homework,” said Rachel Weber, senior editor at GamesRadar+.

“They’re adults with serious disposable income and a weakness for nostalgia. Nintendo already proved there’s a demand for an easy way to play older games with the NES and SNES Classic Editions, so it’s no surprise that Atari wants to cash in too.”

The console made a brief appearance at this year’s Games Developers Conference – but attendees were only able to look at the console, not play it.

But thousands of backers have decided to put trust in the team to hit their target of shipping the product by May 2019.

“While turning to Indiegogo might feel like a risk, it’s actually a smart move for a company with such a recognisable brands,” Ms Weber said.

“Canny creators can use it to generate awareness and build a community – which I suspect is what Atari is doing with the VCS, the funding is just a perk.

“Atari has avoided the pitfalls of asking too much, or promising more than they can deliver. The campaign has already smashed its target, so demand isn’t a problem, but whether or not the machine is anything other than a novelty has yet to be seen.”