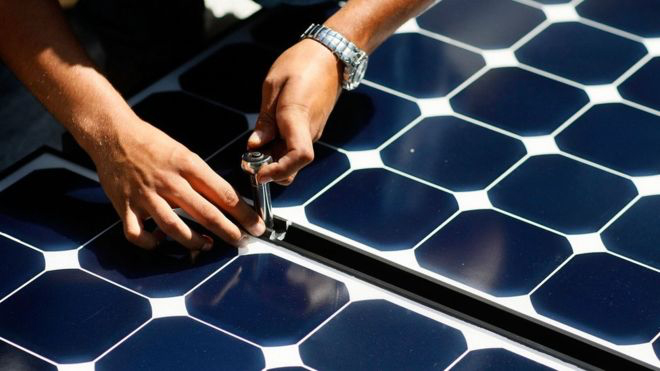 Google is offering a new service, which it says could help British homeowners save money by switching to solar power.

It first launched in the US in 2015, where reviews suggested it was broadly accurate but gave some odd results.

Google is also working with German software firm Tetraeder on the project.

Project Sunroof uses machine learning to estimate how much solar potential a house has by examining the property’s features, such as its roof area and angle, and weather data, such as sun positioning.

Google claims that its models are detailed enough to assess the impact of a single tree on a home’s solar potential.

It isn’t the first tool of its kind – Ikea offers a similar service in collaboration with Solarcentury, and Tesla launched its own Solar Roof Calculator last summer.

But these companies and others require homeowners to submit additional data about the shape of their roofs or their homes before getting a quote on savings.

“By analysing the roof shape, they will take out one of the steps that you would have to go through to get solar panels installed,” Mr Marshall told the BBC.

“The speed of the process means that if you’re half-tempted by the idea, you’re more likely to go ahead with it.”

Project Sunroof first launched in the US in 2015 and then in Germany last year. It is now available in select UK regions, including Birmingham, Brighton, Liverpool, Newcastle, Reading and parts of London.

Nicole Lombardo, head of partnerships at Google, said: “We are excited to help people in the UK make more informed choices about installing solar panels on their rooftops and transition to renewable energy sources.”

The tool is another example of Google’s public commitment to green energy.

It announced in 2017 that its global operations were powered using only renewable energy sources.