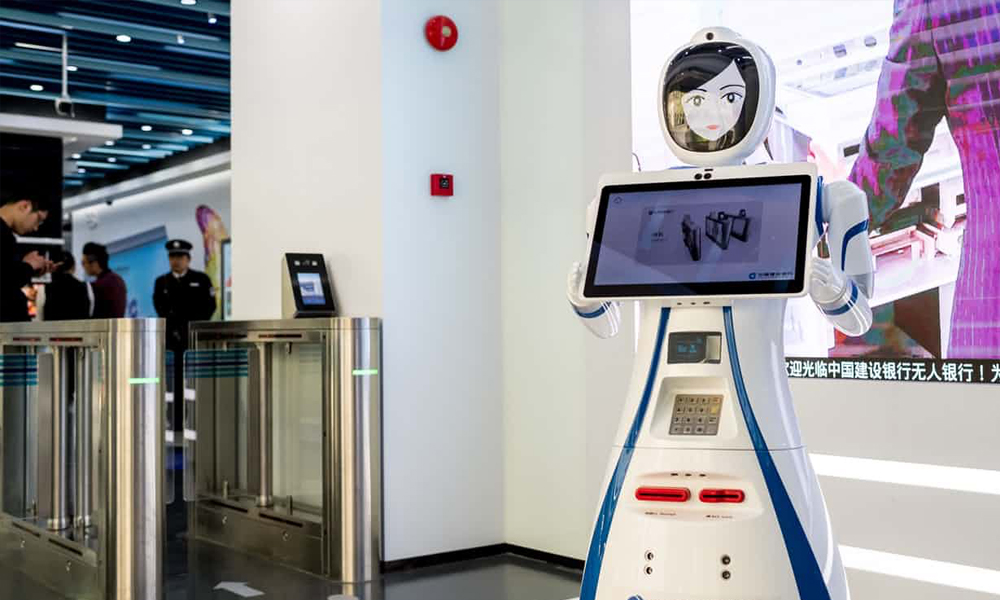 ‘Little Dragon’ can chat to customers, accept bank cards and check accounts. She joins a growing army of robot workers in China’s cities

As guardian of the bank, she talks to customers, takes bank cards and checks accounts (she comes complete with a PIN pad) and can answer basic questions. After a quick initial chat with Xiao Long, customers pass through electronic gates where their faces and ID cards are scanned. On future visits, facial recognition alone is enough to open the gates and call up customer information.

Inside, automated teller machines help with services such as account opening, money transfer and foreign exchange. A second robot waits inside the barriers, and there is a VR room and video-link should customers want to talk to a mortal. 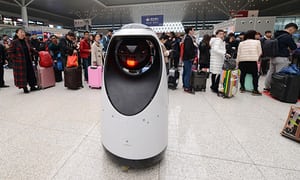 There is also a staggering number of security cameras. I counted eight in the lobby alone, and loitering for too long or pulling out a camera quickly produces a human security guard who has been hiding out of sight.

The bank is rather low on customers, who in the main appear rather ambivalent. One man in his 30s shrugs that he does most of his banking online anyway, and avoids coming into branches – though at least he didn’t have to queue.

Robots are handling more and more aspects of everyday life in Chinese cities. They have been deployed in train stations for security purposes; robot security guards at Zhengzhou East railway station are programmed to scan travellers’ faces and respond to common questions.

The chief executive of Chinese e-commerce giant JD.com recently predicted that robots will eventually replace human workers in the retail industry, with China’s unmanned retail sector expected to triple in size to 65bn yuan (£7.5bn) by 2020, according to iResearch.

Robots are being used to cook – both in restaurants and industrial kitchens – and a video of an entirely automated dumpling factory went viral on Chinese social media last year.

Robot waiters have been a fad for a number of years, with restaurants keen to draw customers with novel experiences, as well as saving on staff costs. Robotic waiters can be frustratingly slow for hungry diners though. Most move along pre-programmed tracks, and for some restaurants they have proved more trouble than they’re worth.

But the rise of China’s robot industry is a core part of Beijing’s economic ambitions. Beijing’s Robotics Industry Development Plan is a five-year programme that targets the production of at least 100,000 industrial robots a year by 2020, partly to reboot the country’s ailing manufacturing sector.

“In AI and robotics, China clearly is interested in emerging as a global leader,” says Professor Yu Zhou at the department of earth science and geography at Vassar College. “Moving up the value chain is what is really behind China’s move into robots. Working wages have been increasing and there have been shortages of low-level labour.

“You have to replace this labour, and automation and robots became a natural area to look into. Robots are really seen as an upgrade – better products, more efficient and cheaper.”

According to figures from the International Federation of Robots, China is already the biggest shareholder of the robotic global market at a net worth of $30bn (£22bn). Taiwanese manufacturer Foxconn has cut tens of thousands of employees by replacing them with machine labour, reportedly deploying more than 40,000 factory robots, and has said it aims to achieve 30% automation by 2020.

The rise of the robots also ties in with heavy public and private investment in facial recognition and AI. In Shenzhen, Shanghai and Beijing, local authorities have been using facial recognition to target jaywalkers. Those caught crossing the road illegally have their photos taken, and after being identified can be publicly named and shamed on large screens by the roadside – and even sent fines automatically via instant messaging.

Police at Qingdao beer festival used a network of cameras and facial recognition technology to scan the faces of the 2.3 million attendees. Those identified from the national police database as having a history of drug addiction were tested. As a result, 19 were arrested for drug use.

Meanwhile, customers in the Hangzhou branch of KFC can pay for orders using only their faces, and retailers including Tencent have been experimenting with cashier-less stores.

The frenetic growth of the industry is giving some cause for concern, though. 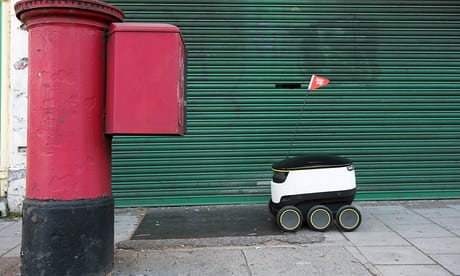 “There is a risk that you sacrifice quality for quantity,” says Jeffrey Ding, researcher at the Future of Humanity Institute, Oxford University, adding that there are concerns about how AI and robotics could exacerbate a growing social and wealth divide. “There’s also an emerging pushback in China against violations of privacy,” he says. “A national survey, called the China Economic Life Survey, found nearly 80% of Chinese consumers said they felt the development of AI would present a serious threat to their privacy.”

Back at the China Construction Bank in Shanghai, Xiao Long is not burdened by any of these mortal problems. “If you have any questions, just ask me!” When probed on her future career prospects, she just smiles and blinks.