France has condemned as "unacceptable" a US move to re-impose sanctions on companies trading with Iran.

The action from Washington followed President Donald Trump's decision to pull out of a landmark deal that sought to curb Iran's nuclear programme.

French Foreign Minister Jean-Yves Le Drian said European companies should not have to pay for the US decision.

The US says firms have six months to halt business and cannot enter into new contracts or they will face sanctions.

As the fall-out from Mr Trump's decision continues, Iran has called on European plane manufacturer Airbus to say whether it will stick to a deal to sell it nearly 100 airliners.

What has France said?

In an interview with Le Parisien, Mr Le Drian said: "We feel that the extraterritoriality of their sanction measures are unacceptable. The Europeans should not have to pay for the withdrawal from an agreement by the United States, to which they had themselves contributed."

He said the new sanctions regime would also affect the US and that Europeans would "put in place the necessary measures to protect the interests of our companies and start negotiations with Washington" on the matter.

The foreign minister said the commitment of other partners to the Iran deal should be respected.

He said the effects of the US move were already being felt in rising oil costs and an increase in political uncertainty in the Middle East.

Equally forceful was his colleague, Economy Minister Bruno Le Maire, who said Europe had to defend its "economic sovereignty".

"Do we want to be vassals deferring with a curtsy and a bow to decisions made by the US so that the US polices the world economy?"

He said France would propose sanctions-blocking measures to the European Commission in the next few days.

At the same time, Mr Le Maire said the European Union would hold talks with Washington on obtaining different rules for European companies trading with Iran.

France, Britain and Germany have all said they will work with Iran to try to salvage the Iran nuclear agreement.

German Economy Minister Peter Altmaier said he would work with affected companies to try to "minimise the negative consequences" of the US move, adding: "That means, it is concretely about damage limitation."

Which companies could be affected?

A number of French firms have have signed billion dollar agreements with Iran since the nuclear accord was signed in 2015.

Aside from Airbus, they include French oil giant Total and the car makers Renault and Peugeot.

Reuters news agency quotes a senior Iranian official as saying that Iran is talking to Airbus about using a narrow window before sanctions come into effect to continue with the deal. At least three of the 100 planes at issue have already been delivered.

Companies would have to wind up investments by November or face US sanctions.

What is the political 'uncertainty' Mr Le Drian talks of?

The latest example is the military clash between Iran and Israel in Syria. 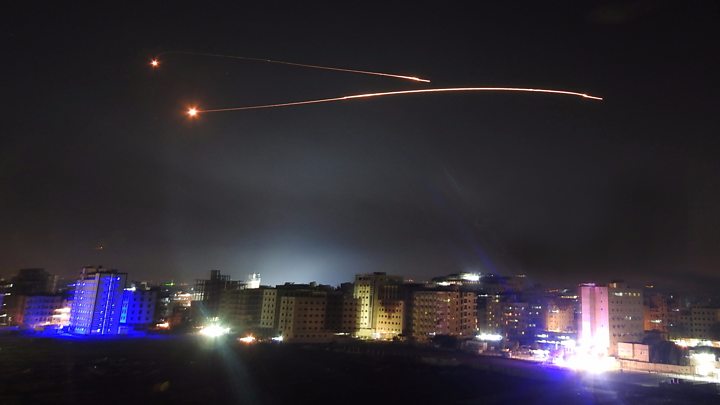 Iran's deployment of troops to the country to help President Bashar al-Assad has alarmed Israel.

What are the latest US sanctions moves?

On Thursday,US individuals and entities were barred from doing business with six Iranian individuals and three companiesWashington says have ties to the Revolutionary Guards.

Treasury Secretary Steven Mnuchin said the penalties targeted those who had funnelled millions of dollars to the group, funding its "malign activity".